Come to this year’s Fall open studios and check out our new digs.  We have stayed int he same building and on the same floor, but we have moved to a much sunnier and nicer location.  The entrance is now on the Mission St side of the building at 2111 Mission Street.

We’re having an opening reception on Friday evening 5pm-9pm with snacks and adult beverages.  Saturday and Sunday, we’re open from 11am-5pm.

We have more artists participating this year than past years.

You can also view my work at City Art Gallery at 828 Valencia Street in the months of October and November.  The opening reception for November is Friday, November 2nd 7pm-9pm.

The City Art Gallery is open Wednesdays through Sundays.

April 6th, Friday evening, from 4pm-9m, my studio mates and I will be hosting an open studio party. Come for the drinks and snacks and leave with a beautiful piece of ceramic art.

The address is 3265 17th St. (between Mission and Capp).  Just one block away from Bart and surrounded by the Mission nightlight of bars and restaurants. 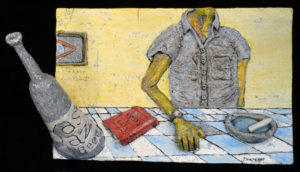 I hope I see you there!

Hi de ho Art lovers.  I’m getting real excited about my upcoming show at the Oakland Museum of Ceramics.  I thought that I would share some images of smaller work that will be included to pique your interest in the show.

I hope that you can make the opening on Sunday, October 15th from 5pm-8pm.

The museum is located at 4401 San Leandro Street, Oakland, CA 94601. (Please call, text or email if you plan to visit before or after the opening reception.)  My email address is my first name @ my first name last name dot com. (e.g. john@johnsmith.com)

It is my great honor to be displaying work at the Oakland Museum of Ceramics.  My show, Land-O-Smiles, will be up from October 1st through November 15th, 2017. There will be a lot of new work on display, both large and small.

I hope that you can make the opening on Sunday, October 15th from 5pm-8pm.

The museum is located at 4401 San Leandro Street, Oakland, CA 94601.  (Please call, text or email if you plan to visit before or after the opening reception.)  My email address is my first name @ my first name last name dot com. (e.g. john@johnsmith.com)

I am pleased to say that I currently have a show at the Smaart Gallery, located at 1045 Sutter Street, San Francisco.  The show is from July 4-August 31, 2017.

I will be at the gallery during the First Thursday Lower Polk and Tenderloin Artwalk, on Thursday August 3rd, 2017, if you want to meet up or talk with me about any of the art.

The Smaart Gallery and Studio has been around since 2012.  Steve Allen, the driving force behind the studio and the gallery, has been a huge boon to the ceramic art community in San Francisco.  Be sure to check out his other shows and if you have the inclination to get your hands dirty and want to learn more about clay, his studio and classes are great place to learn and grow.

I received over 50 entries in my Name That Totem contest.  It’s been a couple of weeks, and I still cannot decide on my favorite entry.  I certainly have learned a lot of things (Otolaryngoloists are specialists in in ear, nose and throat and shy guys are timid troublemakers in various video games are among other useful facts that I acquired from this contest.) But I am torn because there are so many good names to choose from.

If you entered, you should be getting an email from me in the next week or so announcing the winner of the contest.   If you didn’t win the grand prize, don’t worry. Everyone who entered is a winner.  I will offer anyone who entered, a discounted price on my bottles.

All of the entries are listed below.  (If a title appears more than once, it was submitted by more than one person.)

I have posted my latest totem below, with the very unsexy title of, “Totem #5”

If you can come up with a better title and I choose it, I will happily give you a smaller piece of my work. Please submit any title suggestions in the comments below, in an email directly to me or better yet, come see the totem in person and drop off your title suggestion at my studio.

I want to invite anyone interested in seeing my work to come by my studio this weekend, November 5-6.  Open studio hours are noon to 6pm on Saturday and Sunday.  Our address is 3265 17th Street, we’re on the third floor.  There should be a doorman in front of the building to let you in.