I think that Picasso’s Guernica is incredible, both politically and artistically.  When I saw the it and the studies that lead up to it at the Prado in Spain, it literally made me cry.  (I see that Guernica has since been moved out of the Prado into Museo Nacional Centro de Arte Reina Sofía.  But it remains in Madrid.)

Other pieces I have done have referenced parts of that masterwork.  This is my interpretation of one small aspect of that amazing painting.

I did a few bas-relief wall pieces based on classic paintings.  Here are three from the series: 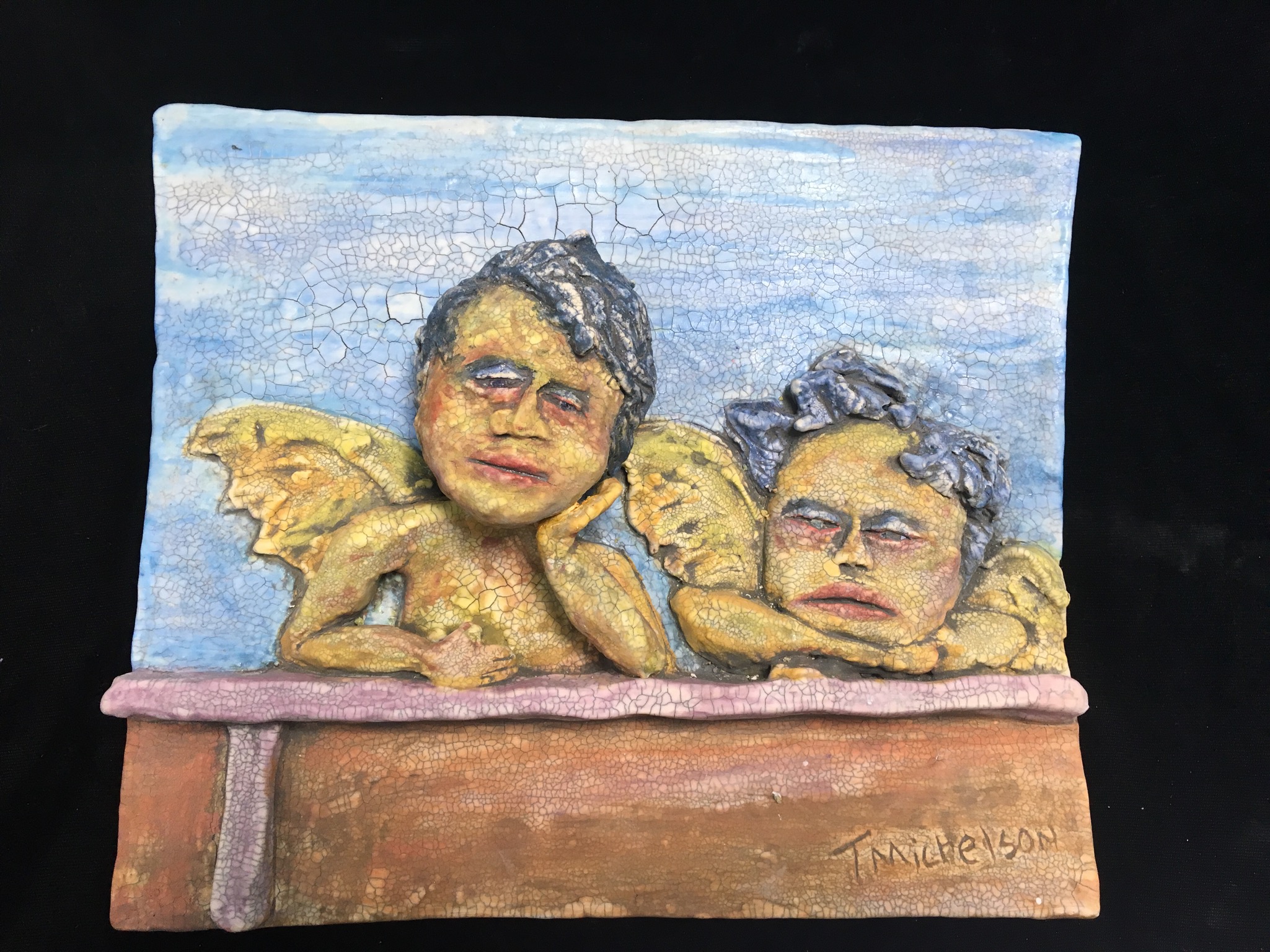 I also did a large wall piece based on the Last Supper, called the Penultimate Supper, but that one sold before I got a decent shot of it.  (Either a photo will be posted or I will figure out how to add the movie I took of the piece.  Stay tuned.)

Here is a smallish, wall-piece that shows a muscleman with a much more developed right arm, than left. 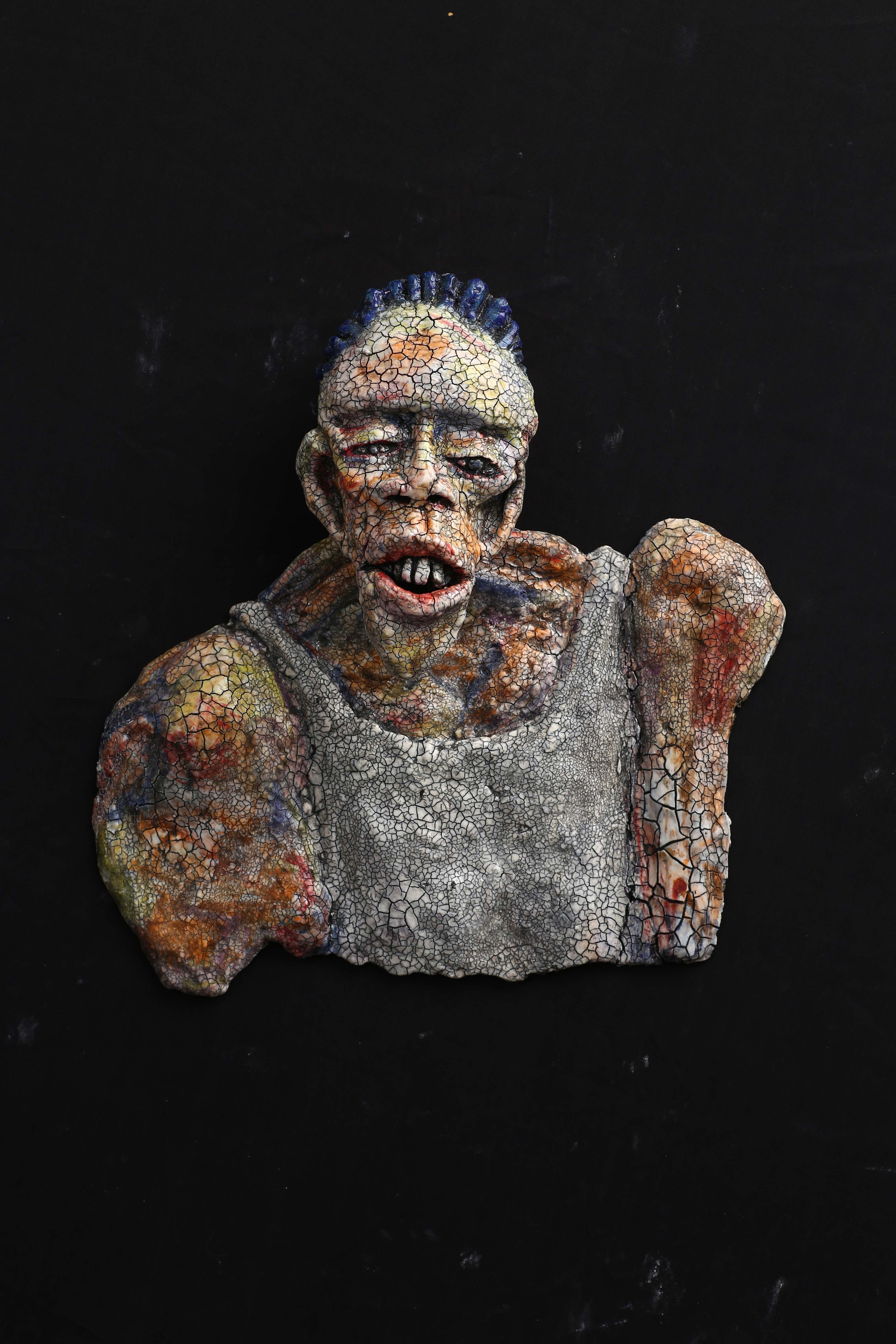 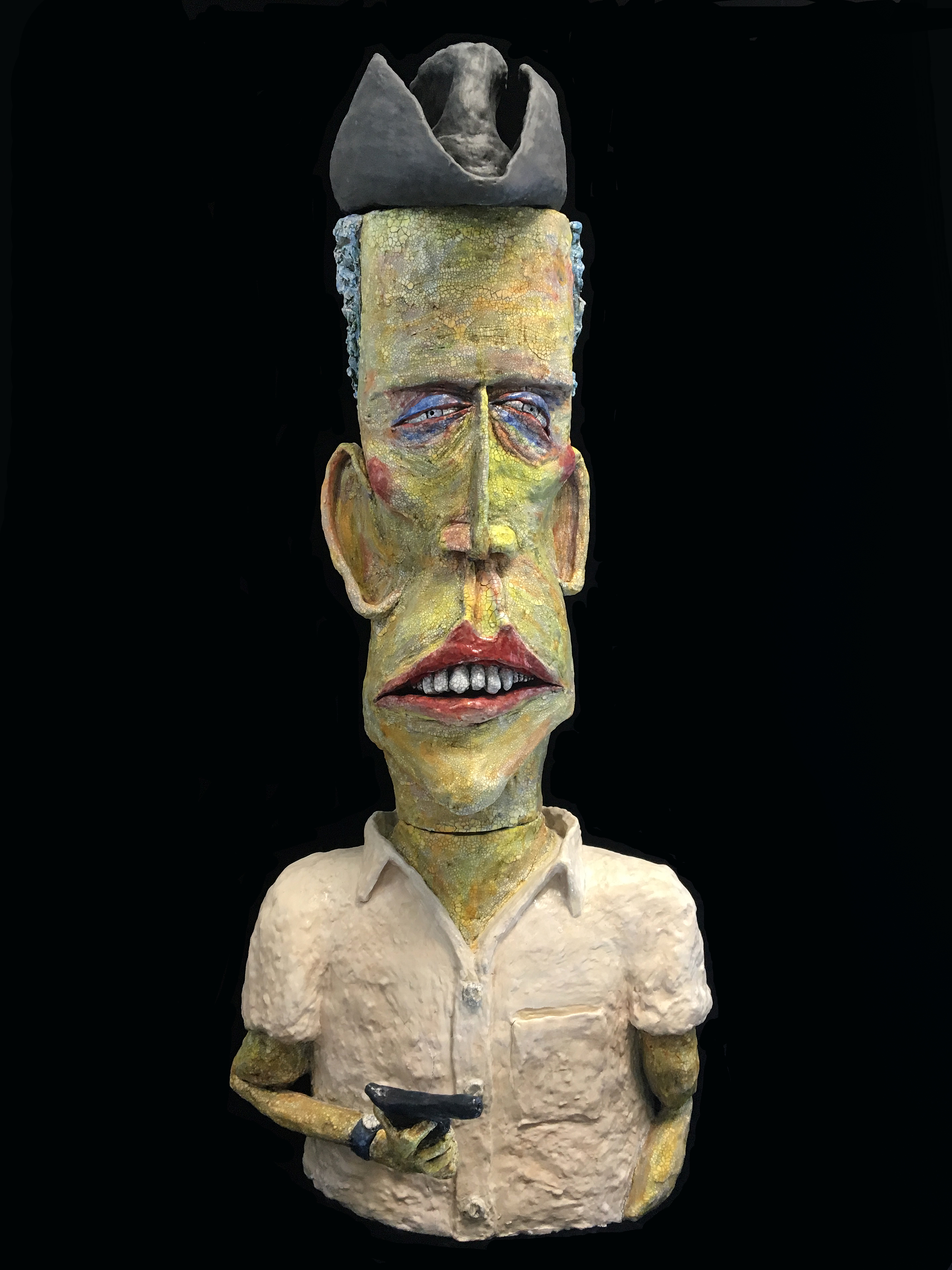 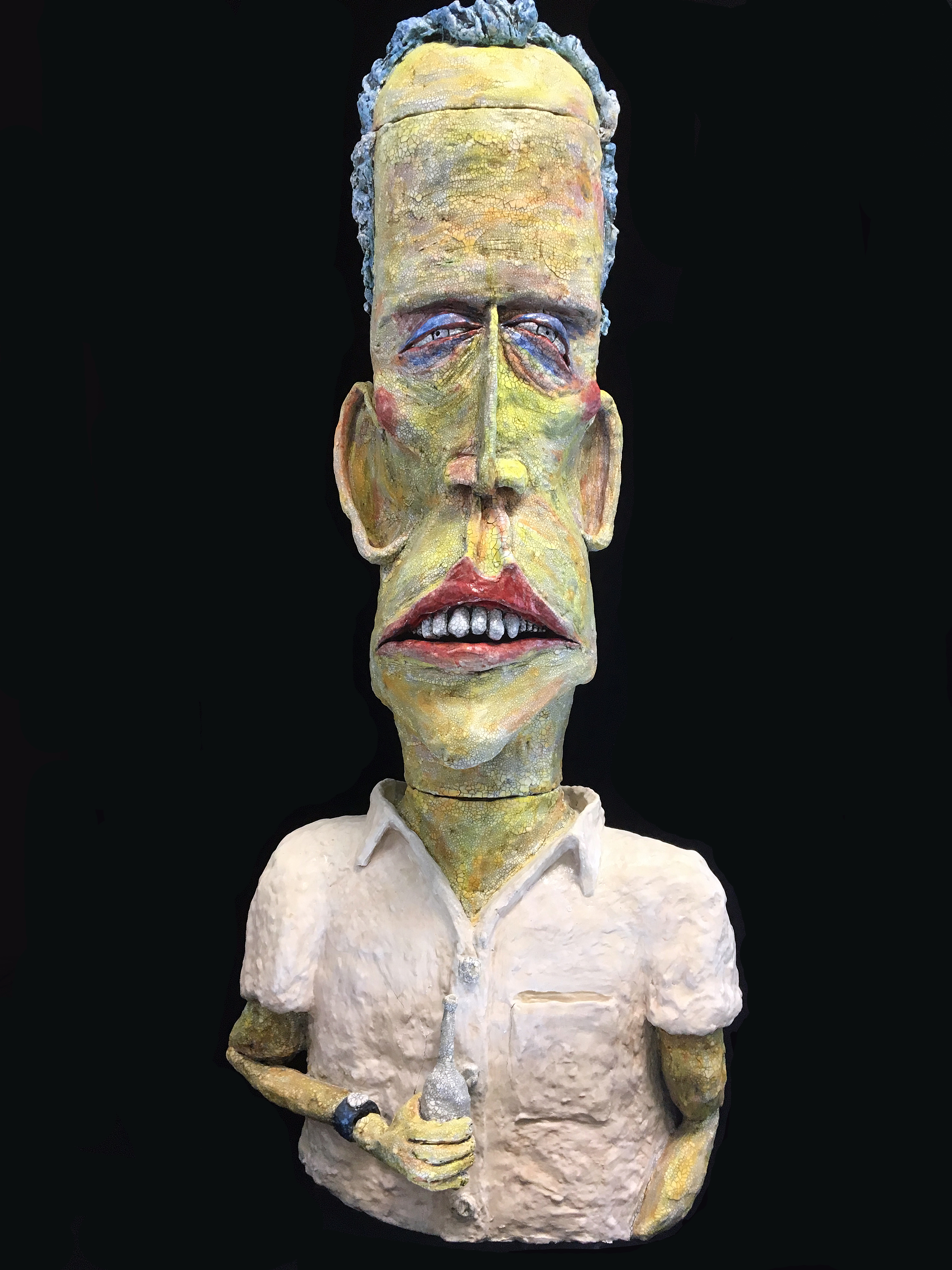 Here are the alternate versions with the different tops and different arms. 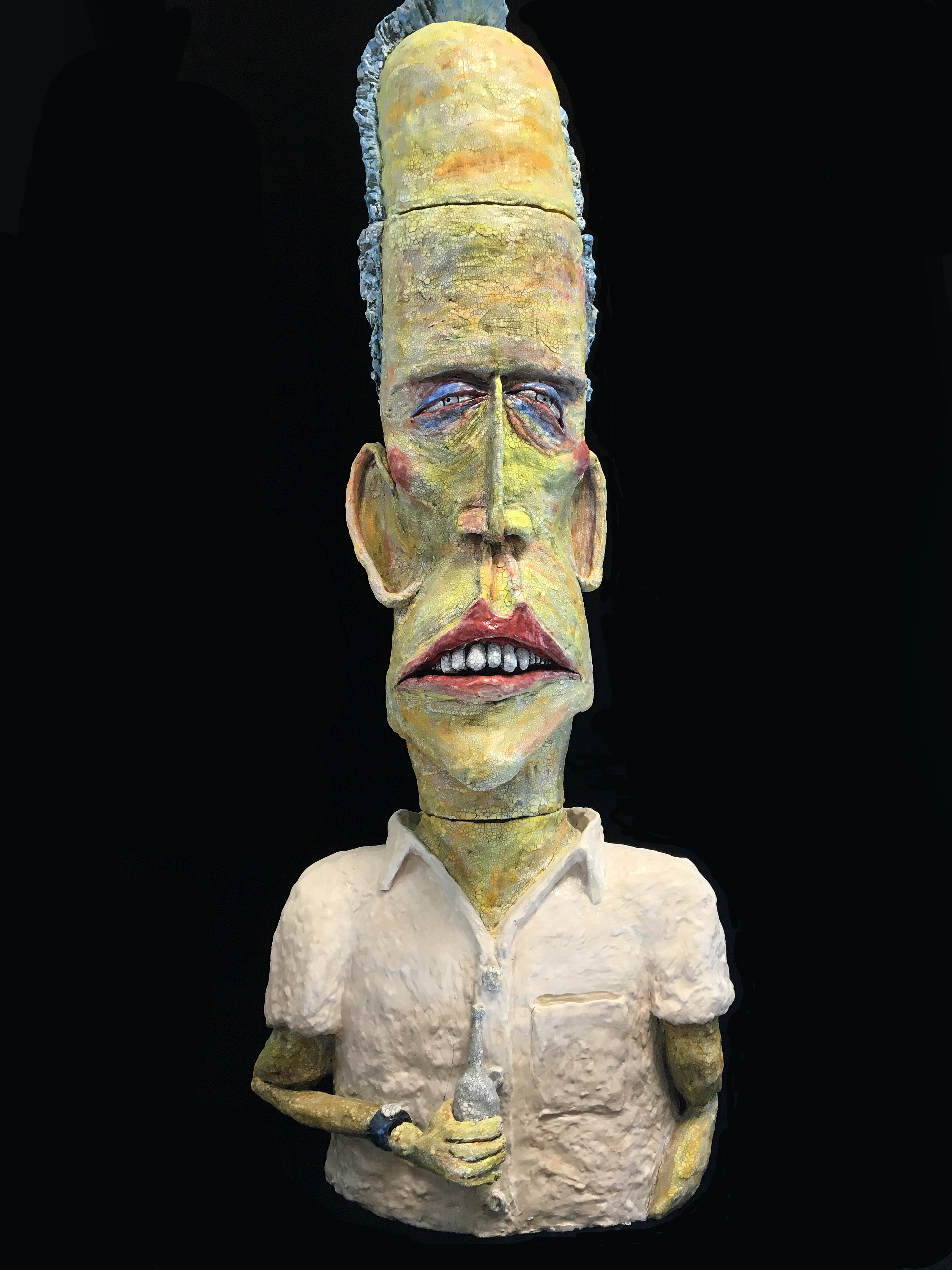 This is a piece in which I wanted to leave the narrative open and have the viewer actively involved in creating the story associated with it.

I created the head, initially, without any top, so that the brain is exposed.  Then the viewer can add one of three of different tops to the head, a small balding forehead; a large balding forehead or a cowboy hat.

The arm can be changed so the subject is holding a pipe, a bottle or a handgun. 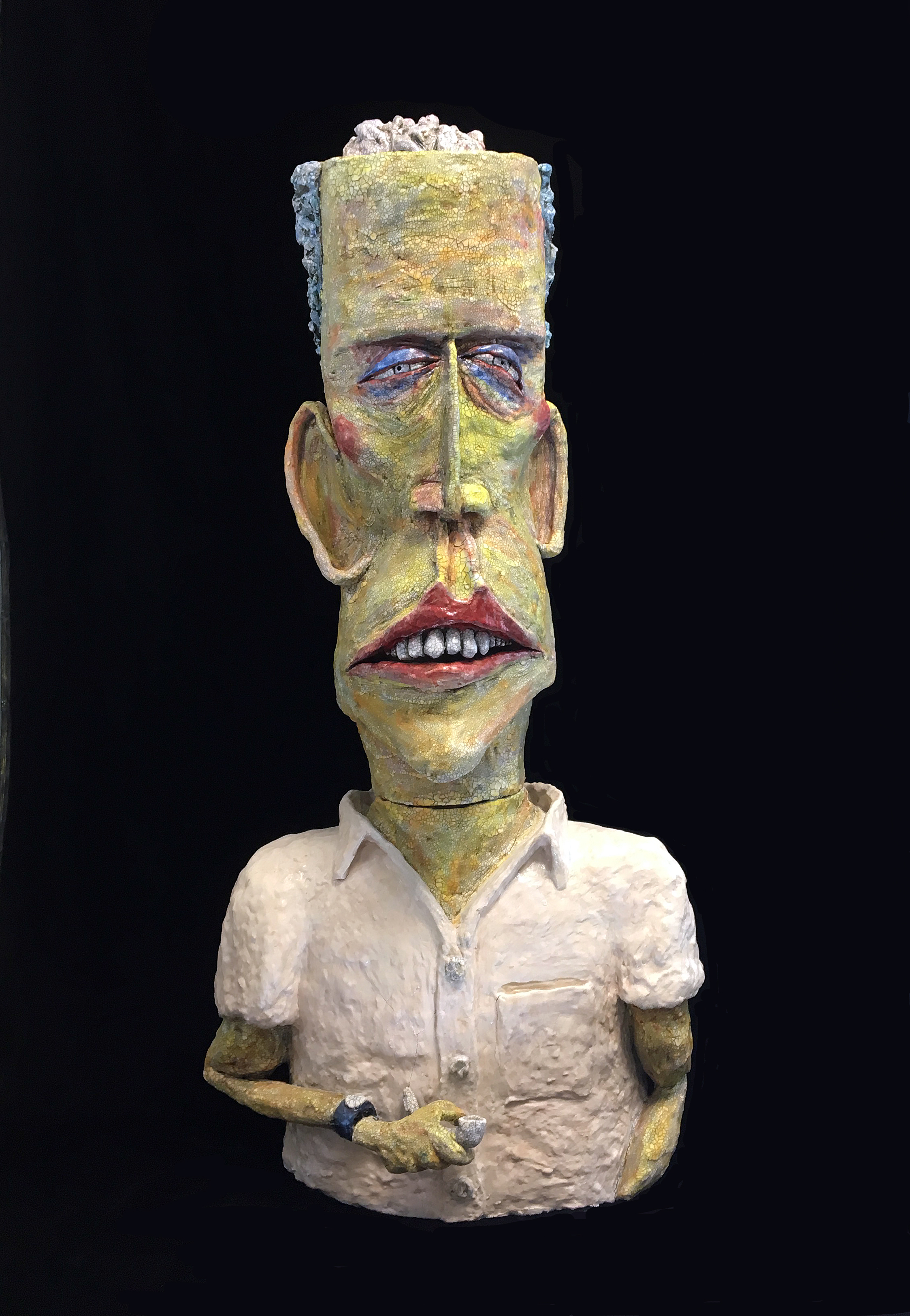 Here is a wall piece that I did of myself, when I was beardless, but with my crooked smile

My work is dark and humorous. I try to convey how life is both hopeless and bleak, yet beautiful and inspiring. I identify with the outcast in all of us. We are a world of lost souls, waiting for our inevitable demise. In the meantime, let’s have a drink and a laugh.

I am fascinated with the human face and its lack of symmetry. I am especially drawn to faces with too many miles and not enough upkeep.  While exaggerating facial expressions and features, I try to keep the demeanor ambiguous, often in a kind of “euphoric-melancholy.”

When constructing my work, I pay special attention to highlight the ubiquitous cracks on the surface. The cracks, which range from barely perceptible to large fissures, help convey the wounds and scars that life bestows on us as we live our lives.

Sculptor Tom Michelson was born in Kansas City, Mo but spent most of his childhood moving from city to city with his mother after his parents divorce. His work and aesthetic are influenced by artists Charles Bukowski, Tom Waits, as well as Robert Arneson and  West Coast Art Funk movement. Tom’s work offers a glimpse into the lives of those denizens of the soft underbelly of the Mission and Tenderloin.

Tom had been working with ceramics for more than 20 years, but his cancer diagnosis a few years ago encouraged him to leave his day job and  become a full-time studio artist.  The travel industry was putting food on the table, it did not feed his soul the way that art did. Tom left travel and began his descent into being  a full time artist.

Tom opened the Red Brick Studios in the heart of the Mission to build community and and to provide him enough space  for him to work on a larger scale.  The heroic scale of his work is often diametrically opposed to the subject matter creating a unique tension in the work.